Some women hate pregnancy.
Some women dread childbirth.
Some women can’t bear to lose sleep while caring for a restless newborn or doing laundry or changing diapers.

Parenting young children (and old, I can imagine) is hard, on multiple levels, and we could list the reasons.

But, the hardest part of motherhood?
It’s the moment a mother (or mother to-be or mother in-waiting) realizes the fragility of a child’s life and their own powerlessness to protect it.

Unlike many of my peers, getting pregnant has been easy for me and my pregnancies have been relatively drama-free. And childbirth, though excruciating, has left me unscathed and willing to go another round. I was not naive about the difficulties of pregnancy and childbirth. And, as I entered those awkward first few months of motherhood, I was not surprised by the difficulties I encountered. And now these wild and crazy first few years? I’ve never been surprised by how difficult this work truly is.

But, six weeks ago, I was surprised by a phone call from my OBGYN.

The short version of my story is that our baby–our little girl–has a Single Umbilical Artery (SUA). The doctor called me that day to tell me that a Perinatologist had spotted this abnormality on the photos of our otherwise-normal ultrasound and wanted to follow-up with another, more detailed ultrasound to rule out other possible abnormalities. She assured me that, given the otherwise normal ultrasound images, the SUA was probably an isolated abnormality. But, I should be aware that SUA is often present with other congenital defects and further testing would need to be done.

Since it was a Friday afternoon, I had all weekend to play internet detective and find out what terrible things could be happening to my baby.

What I found out: First of all, SUA is fairly common (somewhere between 1 in 100 and 1 in 500 live births). And, like my doctor said, the most common, majority-case scenario was that the SUA was isolated and there would be no other abnormalities. But, if our situation was like the minority of SUA cases, we could be dealing with much more difficult implications. The possibilities range from slight and manageable challenges (things like low birth weight, premature birth, or Trisomy 21–aka Down Syndrome) to much more severe abnormalities (things like renal and cardiac anomalies, Intrauterine Growth Restriction, and Trisomy 18–aka Edwards Syndrome). The more severe abnormalities could lead to miscarriage, stillbirth, and early infant death.

As you can imagine, it was a rough weekend.

The good news for us is that when we saw the Perinatologist early that next week, the only other issue he detected in our Level II ultrasound is a small placenta tear. There don’t seem to be any other congenital defects. I have now been elevated to “high risk” but, as long as the placenta tear does not grow or develop into a clot, we should not expect any serious complications with the rest of the pregnancy or our daughter’s health.

How’s that for good news?

But I’m not writing this to tell you the good news.

As much as I’m thankful a million times over that our baby appears healthy, our SUA scare has reminded me of all the mothers who don’t hear good news.

And it made me feel scared and helpless and powerless.

I always knew–cognitively, like the way I know “how gravity works”–that something like this could happen to me or to my children. But, now I was faced with the reality of it.

Maybe it’s my turn.
Maybe this time it’s my baby.

I don’t want to be overly dramatic about this because, as I’ve said, my story ends with good news and the fear of losing a child is nothing compared to the reality of losing a child. But I also don’t want to minimize the lesson learned here, the important and sobering lesson that every mother will learn eventually:
The hardest part of motherhood is the fragility of a child’s life and the knowledge that we are powerlessness to protect it.

The big question, I guess, is how we deal with this knowledge.
How do we continue having more children and loving them fully and deeply when we know that, at any moment, we could lose them? How can we have the faith to even let them out the front door or in a car or down the slide at the park without fearing for their lives?

In addition to not over-dramatizing this story, I also don’t want to over-theologize it because I know that many of the people who read my blog are not Christians and don’t have the same context for understanding the way the Maker of the Universe orchestrates the lives of small children. But, I don’t know how I could process these thoughts without my faith. I’m sure there are other coping mechanisms that I could enlist to help, but I’m not sure any other system of belief would offer the same consolation.

A few years ago, a friend told me she had just lost her third pregnancy–two to miscarriage and one to stillbirth. The news was difficult to process, but it was even more difficult to find a proper response. I’m not sure I ever found one.

The picture that came to mind, when I considered her situation, was the concept of painful expectation that Paul talks about in the book of Romans.

For I consider that the sufferings of this present time are not worth comparing with the glory that is to be revealed to us. For the creation waits with eager longing for the revealing of the sons of God. For the creation was subjected to futility, not willingly, but because of him who subjected it, in hope that the creation itself will be set free from its bondage to corruption and obtain the freedom of the glory of the children of God. For we know that the whole creation has been groaning together in the pains of childbirth until now. And not only the creation, but we ourselves, who have the firstfruits of the Spirit, groan inwardly as we wait eagerly for adoption as sons, the redemption of our bodies. (Ch.8, v. 18-23)

I don’t want to stretch this meaning too far, but I think its application might be appropriate.

Basically, I believe this:

We are broken people. We live in a broken world with broken bodies. We give birth, in pain, to broken children. This brokenness should not surprise us. But we are suffering through this painful, corrupted world, in expectation of complete and total redemption–of not just our souls but also our bodies. And, to this hope and for this hope, we persevere. We do not believe that the loss of a child is good or welcome or any less tragic. But, if we believe this story, we believe that every breath breathed by that child–or heartbeat, or year lived–is a miracle and a gift because it gives us a glimpse of redemption. This might not make loss any easier, but it does make the hope of redemption all the more poignant.

Mothering is hard.
Physically, emotionally, and mentally, it requires constant labor and commitment.

But the joys of mothering can not be understated.

And, though the fear of losing a child can steal the joy of mothering, it doesn’t need to. Instead, it could free us to embrace each moment with our children–unborn, newborn, long-ago born–as the miracle it truly is.

I wonder if it’s even possible to embrace the sacredness of the life of a child without first understanding how miraculous their very existence is in the first place.

On that note, what should we name her? 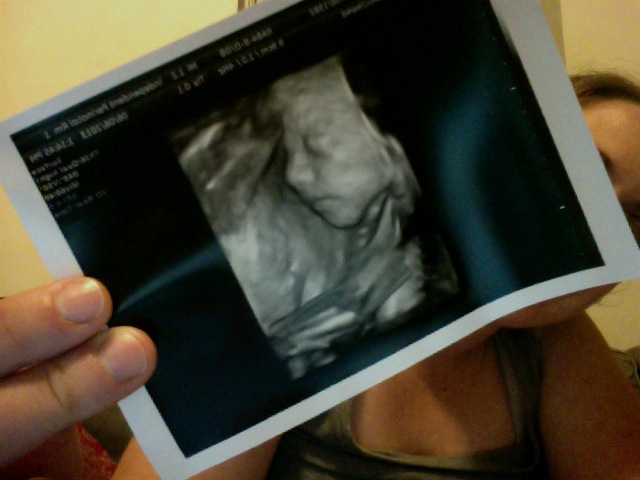 6 thoughts on “The Hardest Part of Motherhood”

Crayfish study at co-op today.
Folk tales with Miss Allison
Taking apart an old car stereo and rigging up a 9V battery to power it.
Best mom ever.
Cold and rainy ain’t got nothing on a backyard cookout with neighbors.
The kids borrowed my phone to write a song and make a music video.